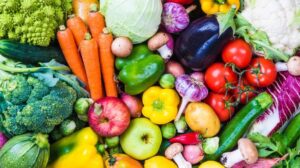 Men can cut their bowel cancer risk by more than a fifth by eating a diet rich in vegetables, whole grains, beans and lentils, a new study has suggested.

Researchers found that men who ate the largest amounts of healthy plant-based foods had a 22 per cent lower risk of bowel cancer compared to those who ate the least.

However, there was no link between a similar diet and the risk of bowel cancer for women, the study said.

It involved 79,952 men in the US as well as 93,475 women.
Published in BMC Medicine, participants were asked how often they consumed certain foods and drink from a list of more than 180 items. They were also asked about portion sizes.

Those involved in the study could tick that they consumed each food or drink item “never or hardly ever” to “four or more times a day”.

END_OF_DOCUMENT_TOKEN_TO_BE_REPLACED

Click on the audio controls below to hear the interview between Kathie Harding and Denise & Stuart Savage broadcast on Seahaven FM on 31st October. It is an insightful account of the impact made by cancer on the livesof  a patient and her carer, together with some brilliant music.

Starting from our November 24th Christmas Lunch C-Side will be holding its meetings and other events at the House Project Centre located at 168 South Coast Road, Peacehaven BN10 8JH. We are where the pin is, below

Access to the rooms is via the foot-path to the right of the shop or via the House Project Centre’s own car park, accessible via Arundel Road and Bolney Avenue on the north side of the South Coast Road. There is also a free car park on Steyning Avenue. For those coming by bus from Brighton or Seaford you should use the 12 or 12A and the Bramber Avenue stop. The nearest stop for the 12X service is Roderick Avenue.

“Stoma care products are tailored to your needs and delivered free of charge, no matter where you are – whether you’re at home or on holiday”.

“Dansac products are developed to support the quality of life for people living with a stoma. Our products are easy to use and provide security, comfort, and discretion”.

The Ostimate’s Kitchen: Home delivery service Fittlworth, in conjunction with Colostomy UK, have created a nutritional guide and recipe book to help ostimates enjoy a healthy and varied diet. Fittleworth have worked closely with nutritionist Laura Coster Bsc (Hons) to create this guide to support ostimates and also French chef Sylvain Gachot to create unique recipes that have been adapted to suit a typical ostomate’s requirements. There will be a demonstration and tasting session.

The latest inovative products from Dansac and Hollister will be shared highlighting the importance of security & skin health. 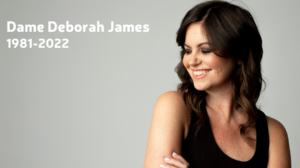 There is nothing much that can be added to what so many others have already said on hearing the news of the death of this valiant young woman.

She devoted the last years of her brief life to raising awareness of the symptoms of bowel cancer despite knowing that for her, as for far too many others, her bowel cancer diagnosis came too late.

We are reminded that despite the many and considerable advances that have been made in recent years, there are still great gaps between the expectations and reality of what medical science can achieve in cancer treatment and avoidance. For a long time to come public awareness of the symptoms of bowel cancer will remain a key strategy.

We owe Deborah James such a lot for lending her last years to such a valuable cause; this debt can be best repaid by redoubling our efforts to help, as she did, to “raise awareness, break down barriers, challenge taboos and change the conversation around cancer”. 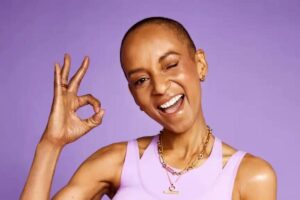 Last October, the Radio 1 DJ Adele Roberts announced she’d been diagnosed with bowel cancer. She’s been through intense treatment, and now wears a stoma bag as her bowel recovers.
To hear her story and the sories from others on living with a stoma, click on the photo or here 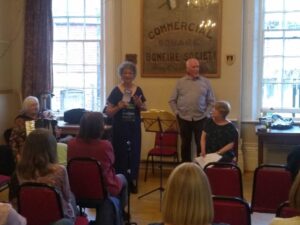 On Saturday 14th May we were treated to a brilliant evening’s entertainment at the Lewes Folk Club upstairs in the Elephant & Castle pub. The star attraction was “The Old Firm Plus One” comprising Marilyn Bennet, Iris Bishop, Denise & Stuart Savage and Jim Ward. Other acts were Charlotte Olive & Richard Spong and Martyn Wyndham-Read. The Lewes Folk Club pledged the gate money ( a not inconsiderable sum) to C-Side several of whose members were pleased to attend a thoroughly enjoyable evening. 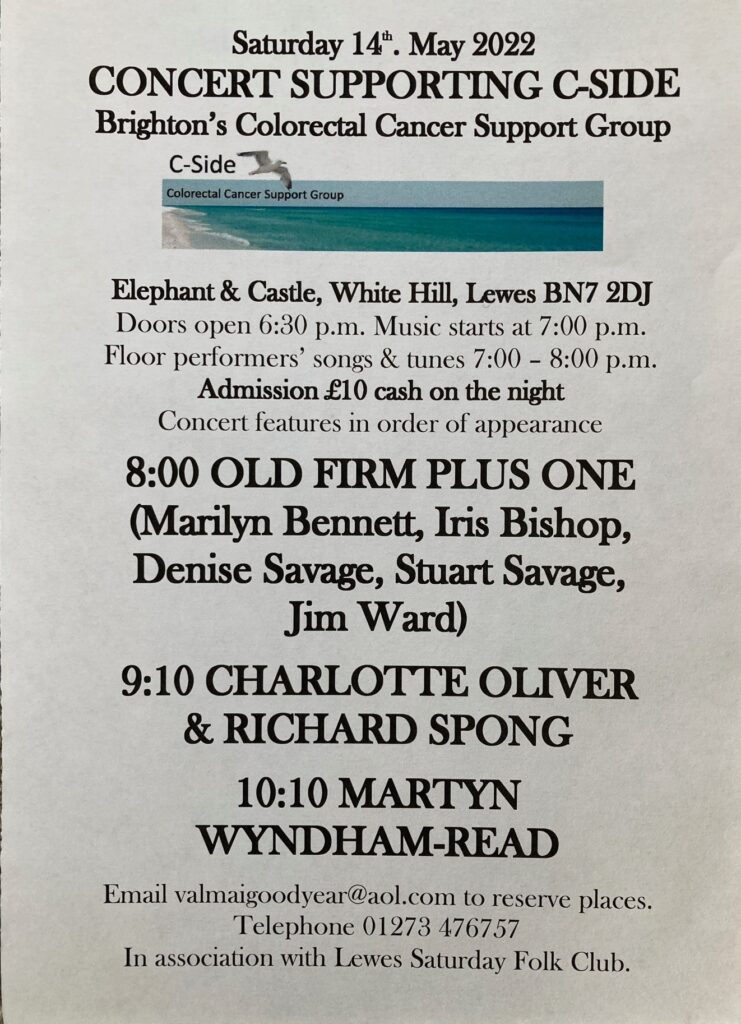 This is definitely an event not to be missed – a Folk Evening (long in the planning & postponed by the pandemic) in support of C-Side.

It’s all in the poster so get it in our diary. A great line-up of artists from the Sussex Folk scene.

To avoid dissapointment by being turned away or the discomfort of having to stand throughout this event, reserve a seat – see the email address on the poster

To find out more of what Mari does click on the AITC logo above or on this link. 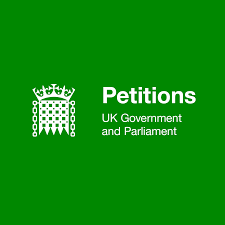