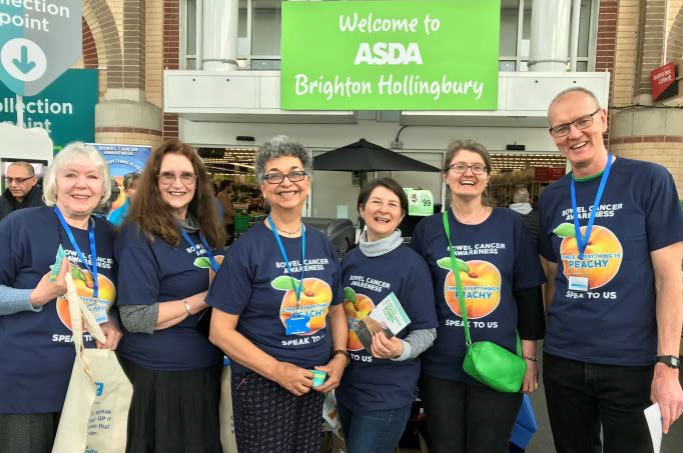 This all-day event took place in the foyer of the ASDA stores in Hollingbury, Brighton.  It was funded by Macmillan.  Our aim was to raise awareness of the first signs of bowel cancer amongst the public and to ensure that they knew what to do should the signs be positive.  It was not a fund-raising event.

The event was a multi-agency collaboration with C-Side working with the following organisations:  The Macmillan Horizon Centre; Albion in the Community (the charitable branch of the Brighton and Hove Albion Football Club); the Sussex Bowel Screening Programme; the Colorectal Nurse Specialist team from The Royal Sussex County Hospital and members from C-Side Colorectal Cancer Support Group.

Twenty volunteers from all the participating groups gave up their time over the day, engaging with the public and distributing leaflets and information.  They were well-prepared with shared information and advice on how to approach the public.    When specific questions were asked about Bowel Screening or advice about Bowel cancer was required, volunteers referred people to our clinical specialists: the Colorectal Nurse Specialists or the Clinician representing the Sussex Bowel Screening Programme.  These specialists recorded some of the  “meaningful conversations” to show our sponsors the sort of impact we were having.  We had a large pull up banner, wore t-shirts that showed a unified presence and a table of information in the form of leaflets and posters. We also had tote bags printed by C-Side in which we could put leaflets, and AITC provided us with even more tote bags and pens as freebies.  Furthermore, ASDA were extremely generous and provided several trays of free fruit to support us with our healthy eating message.

While it is difficult to be precise about our impact, we ascertained that we engaged with more than 1000 members of the public between us during the day.  Even people we did not talk to took leaflets and saw what we were about.  Despite being very busy, the clinical specialists recorded 30 “meaningful conversations” – just a sample of the sort of questions we were asked during the day.  People were generally very agreeable and interested in what we were offering and all involved thought it was a very worthwhile event.

C-Side is only a small charity, but we feel it was a very worthwhile event to have run.  While we clearly had an impact on members of the public, perhaps our biggest achievement was to get the different participating groups working together collaboratively to really raise awareness of bowel cancer.