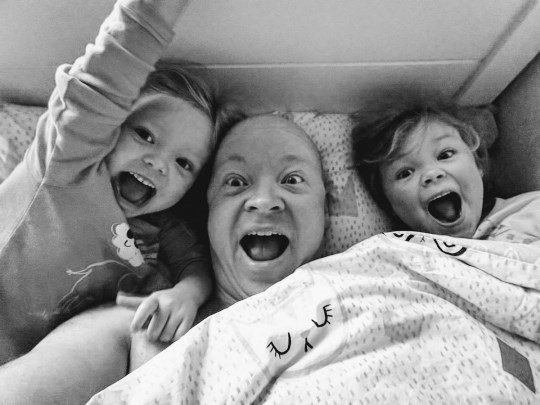 It’s been a while since I put a piece of writing in the public domain, but suddenly I have a lot to get off my chest, well my colon actually.

Just three weeks ago life was good. Correction. It was awesome. The newest edition to our family had arrived on Christmas Eve, joining his two sisters aged 5 and 3. A month later we were on a plane home to Sydney, having spent four great years working for Google in California. My beautiful wife had been working at a start-up on NASA’s Moffett campus and was worried about finding something equally interesting in Australia, but she managed to land a very similar gig with an innovative logistics start-up in Sydney. We’d come back primarily to be closer to family, but also to pursue a dream of setting up a family farm in partnership with my parents – intended as a great place to bring up our three kids but also as a new side-line income stream. We’d spent every weekend scouring Sydney for areas that met our criteria (good schools, commutable, cost of land etc) and we were settling on Kurrajong in Sydney’s west. I was just getting into a training routine for the CitytoSurf run having done the Monteray Bay half marathon a few months prior.

On July 19th I went for what I thought would be a routine GP visit. In my mind it was primarily to re-establish a GP relationship in case my kids needed an urgent care visit (the practice is literally around the corner from our place). I’d also noticed a bit of unusual bleeding from, well, my back passage and very recently a change in bowel habit. I wasn’t alarmed by either of these symptoms but my GP was concerned enough to refer me for a colonoscopy. So began the roller coaster.

I’ll skip much of the detail but in short the colonoscopy revealed a lesion which they believed to be malignant. This was confirmed by a biopsy three days later. A CT scan revealed suspicious swelling in the surrounding lymph nodes so I was booked for a PET CT scan – where radioactive sugar is injected prior to a CT scan to highlight cancer in your body. That PET scan changed the game because it not only confirmed cancer in the surrounding lymph nodes but it also found two smaller tumours in my liver, which the original scan had not identified. So, by August 2nd I was confronted with a stage 4 colorectal cancer diagnosis.

Now for those (like me) who are not all that familiar with cancer, you never just “have cancer”. Cancer is really the name given to a broad family of related diseases. There is also a fairly well established methodology for measuring the progress of any cancer. Here’s the short version:

Stage 1 – this usually means that a cancer is relatively small and contained within the organ it started in.

Stage 2 – this usually means the cancer has not started to spread into surrounding tissue but the tumour is larger than in stage 1. Sometimes stage 2 means that cancer cells have spread into lymph nodes close to the tumour. This depends on the particular type of cancer.

Stage 3 –  usually means the cancer is larger. It may have started to spread into surrounding tissues and there are cancer cells in the lymph nodes in the area.

Stage 4 –  means the cancer has spread from where it started to another body organ. This is also called secondary or metastatic cancer.

These days having a stage 1 cancer is generally no big deal. Stage 4 however is not too good at all. Doctors use ‘survival curves’ – survival statistics for people with your cancer and your stage of progression – to provide some kind of prognosis. In my case, most published survival curves suggest that only 10% of people are still alive 5 years post diagnosis. Now, I’ve since learnt that there are many reasons not to focus too much on these statistics. My prognosis is likely better (none of my doctors will venture a guess) but it is no better than 50/50. And even if I live beyond 5 years, my life expectancy as a survivor of metastatic cancer will almost certainly be much curtailed.

Over the next 6 months I’ll be doing radio therapy and chemotherapy and at some point I’ll have two surgeries, one to remove a section of my colon and the other to remove two chunks from my liver. This for a guy who’s never been seriously sick in his adult life, and who happens to have a major needle phobia.

I know this is so cliched, but life really can change overnight. Suddenly I can’t be sure I’m going to see my new son’s 5th birthday, or even his 2nd. It’s now highly unlikely I’ll see even my eldest daughter get married. I probably won’t know what careers my children pursue. And as for my own career, it’s come to a screeching halt. I’m also struggling to imagine what it might look like in future if I do manage to survive this, because my outlook on life is already so fundamentally altered I don’t think I can just go back to my old world.

Life now is a weird kind of duality.

On the one hand I must be optimistic – I must believe I can beat this cancer to get through the next six months. On the other hand I need to be pragmatic and prepared for a scenario where the treatment is unsuccessful and I’m told one day that I have X months to live. As a husband and dad of three kids under five that scenario is obviously terrifying, but it also has many practical implications that I feel I need to prepare for – financial readiness, a mechanism to ensure my children remember me, legal authority for my wife over our assets, etc.

One of the things I’m struggling most with is this concept of legacy. I’m a planner. Before this diagnosis I’d been thinking of my 1st 35 years – aside from being a ton of fun and travel – as preparation. I felt like I was building a platform (savings, networks, skills, experience) that I could then use in my second act to make a real contribution, to “make my mark”, to build a real legacy for my kids. Perhaps that was a mistake on my part, because I may have no time to do that now. I guess I’m panicking a little.

I feel like I have so many messages to deliver to the blissful masses from my now precarious vantage point, from the importance of early precautionary doctor visits to the merits of life insurance. But putting pragmatism aside, there is one thing I’d urge everyone to do. Stop just assuming you have a full lifetime to do whatever it is you dream of doing. I know it sounds ridiculously cliched, and of course you never think it will happen to you, but let me assure you that life really can be taken from you at any time, so live it with that reality in mind.

Oh, and please stop complaining about the small stuff !